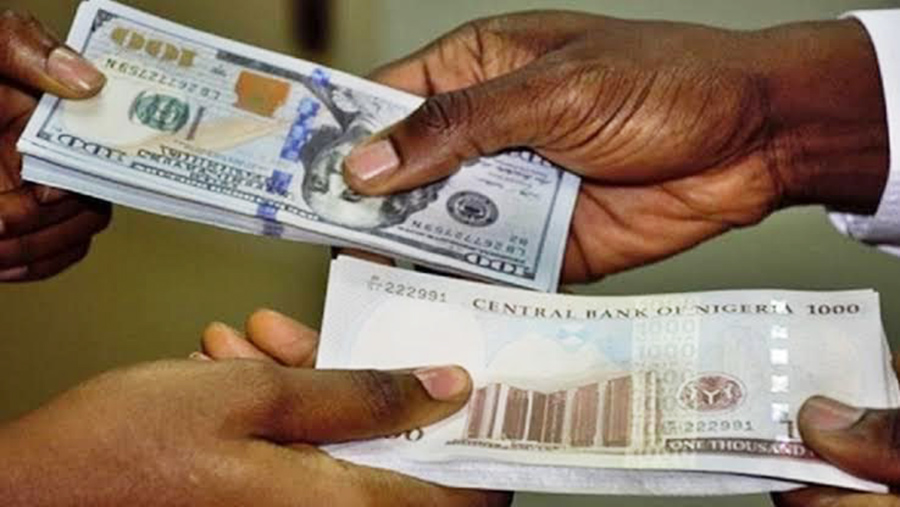 Ending the Dollarization of the Nigerian Economy

There needs to be a fundamental solution to the dollarization of the Nigerian economy, writes Obinna Chima

The recent depreciation of the naira to around 613 naira to the dollar on the parallel foreign exchange (forex) market has remained a source of concern for many Nigerians.

While the current high crude oil environment should have resulted in stable exchange rates and improved foreign exchange inflows for the country, the reverse has been the case, which portends challenges in the economy. More worrying is the dollarization of the Nigerian economy which has seen some landowners, delegates to recent primaries of some political parties allegedly bribed in dollars, airlines and school owners, among others, demanding payments in dollars.

All of this contributes to the weak naira exchange rate and distorts the transmission of monetary policy despite increased efforts by the Central Bank of Nigeria (CBN) to strengthen the naira through its forex intervention as well as its debt financing initiatives. development.

Dollarization, which is the use of foreign currency as a medium of exchange, store of value or unit of account, has emerged as a key factor explaining monetary vulnerabilities and crises. The CBN had threatened to sue anyone found transacting business in the country using foreign currencies as payment.

The provisions of the CBN Act 2007 state, among other things, that “notes issued by the Bank shall be legal tender in Nigeria…for the payment of any amount”.

In addition, the law provides that anyone who contravenes this provision is guilty of an offense and liable, on conviction, to a prescribed fine or six months’ imprisonment.

For the International Monetary Fund (IMF), dollarization can pose significant challenges to policy makers. It also limits the ability of monetary authorities to act as lender of last resort; hinders banks’ liquidity management; and weakens financial sector stability, as it can amplify the impact of exchange rate movements on bank balance sheets, increasing the risk of contractionary effects and bank failures.

“A better understanding of dollarization in Africa can thus help assess potential vulnerabilities and the case for implementing policies to mitigate the risks that may result,” the fund added.

CBN Governor Mr. Godwin Emefiele had said that the currency for conducting business transactions in the country remained the Naira and warned that it was illegal to conduct transactions using the US Dollar.

He said, “We will look at areas where people are applying for foreign currency; landlords who charge rent in dollars; schools that charge tuition in dollars or do business in dollars.

He pointed out that it was illegal in Nigeria to transact in foreign currency and advised those involved in the practice to refrain from doing so as the CBN would soon come after them.

Beyond the dollarization of the economy, experts have highlighted the need for the country to increase its productivity and change consumption patterns to support the value of the naira. This was part of the consensus reached by experts during a day-long panel discussion on national issues at a recent forum held in Abuja.

For THISDAY organizer and editorial board member, Dr. Okey Ikechukwu, the CBN has made several policy interventions to improve the value of the national currency, including through the Anchor Borrowers program, which was created and improves access from farmers to loans.

“This initiative alone has created millions of jobs, taken many young people off the path of crime and saved many local economies. Only efforts to revive the economy and have a social impact, as seen in such initiatives, in addition to consuming what we produce and producing what we consume, will give us the prospect of increasing the value of the national currency and maintain it,” he said. .

Obviously, for Nigeria whose currency is not convertible or does not serve as an international currency, it must earn foreign exchange through high productivity and export of goods and services, receipt of monetary donations or the receipt of foreign loans and investments in order to import the necessary goods and services intended for the development of the economy and the improvement of the well-being of the citizens.

Indeed, high levels of foreign exchange earnings and external reserves are the backbone of the Naira exchange rate. They provide rate stability while low levels weaken the naira. But then, it is clear that the CBN does not produce forex; it is what is earned by the country that the Bank tries to manage and use to stabilize the exchange rate.

For Professor Mike Obadan, the CBN has strived to fulfill its mandate using supply and demand management strategies, in particular forex conservation and control measures as well as measures to ensure a supply adequate in foreign currency. This is especially true because forex is a scarce resource that must be managed efficiently if the country is to achieve macroeconomic stability and avoid chronic balance of payments and external reserve problems.

The economics professor and president of Goldmark Education Academy, noted that for some time now there have been forex issues in the country, which predate the current administration, stating that over the years, genuine efforts by the federal government to make progress on these have tended to be undermined by exogenous shocks over the past five years that pushed the economy into recession in 2016 and 2020.

For this reason, in the second quarter of 2017, when the country emerged from recession, the price of crude oil per barrel stood at just $50.21 per barrel.

“Due to the heavy reliance of the Nigerian economy on the oil sector, the impact of the oil crash has been severe on export earnings, foreign exchange reserves, government revenue and other aggregates. macroeconomics, including economic growth.

“The net inflow of foreign exchange turned negative, implying that the country paid more foreign exchange to the rest of the world for the import of goods and services than it received. This implied that the demand for currency was greater than the receipt of currency and the pressure on currency and the Naira exchange rate was very high, which explained the devaluation/depreciation of the Naira against the US Dollar at that time.

“Second, the economic crisis induced by the Covid-19 pandemic in 2020 led to a recession in the third and fourth quarters of last year. Pandemic containment measures in the form of economic lockdowns and travel restrictions and international business have caused recessions for countries to varying degrees.”

The former Managing Director of the National Center for Economic Management and Administration in Ibadan, however, pointed out that the parallel market rate is determined mainly by speculators and rent seekers in a superficial and illegal market, which he says only constitutes a tiny proportion of the foreign exchange market in Nigeria.

“Because the amount of forex available in this market is very small compared to the demand from desperate economic agents who want to buy forex at all costs, the exchange rate is necessarily high. It cannot be used as a reference for the Naira exchange rate.

“If so, then so is the tail wagging the dog!” The parallel foreign exchange market should be avoided by decent economic agents. It will continue to exist as long as the naira is not convertible, the productivity of the economy remains low and the country does not earn enough foreign exchange through the export of goods and services and capital inflows,” Obadan pointed out.

Therefore, in order to stabilize the foreign exchange market and reduce the pressure on the Naira exchange rate, Obadan said there is a strong need to move away from the flawed economic management model of the past.

He therefore called for a revival and reconstruction of the productive sectors of the economy to achieve higher capacity utilization and productivity and competitive manufactured exports; strong government encouragement of local refining of petroleum products for domestic consumption and exports; as well as strong and effective surveillance of the foreign exchange market by the monetary authority to control the round trips of currencies from the deposit banks to the parallel market.

Additionally, Obadan advised the government to ensure that during oil booms, it saves forex and creates fiscal reserves; increases the supply of local raw materials and the revival of the capital goods industry; promote fiscal and monetary discipline and harmony; create an environment conducive to productive capital inflows, especially foreign direct investment; and actively promote the restoration of confidence in the economy to control capital flight.

“A good understanding of the current challenges of insecurity as well as macroeconomic stability will be very useful in this regard; rationalize the structure of imports to manage foreign exchange demand; to the extent that supply considerations permit, use the stock of external reserves to support the exchange rate by increasing foreign exchange market financing; and use moral suasion to encourage Nigerians to patronize home-grown products and reduce their high propensity for disruptive trade and commerce,” he added.

Former CBN Deputy Governor, Professor Kingsley Moghalu, had stressed the importance of export diversification. Moghalu stressed the need for the country to have aligned education, industrial and trade policies to support the growth of the economy.

He also said there was a need to focus on productive knowledge in Nigeria, saying many people attend school but only a few have the kind of skills that can drive an industrial-powered economy.

Therefore, while taking steps to end the apparent dollarization of the economy, improving the country’s foreign exchange earnings and stabilizing the exchange rate requires developed domestic production structures, a diversified economy and a export orientation supported by an effective trade policy as well as a favorable macroeconomic environment.