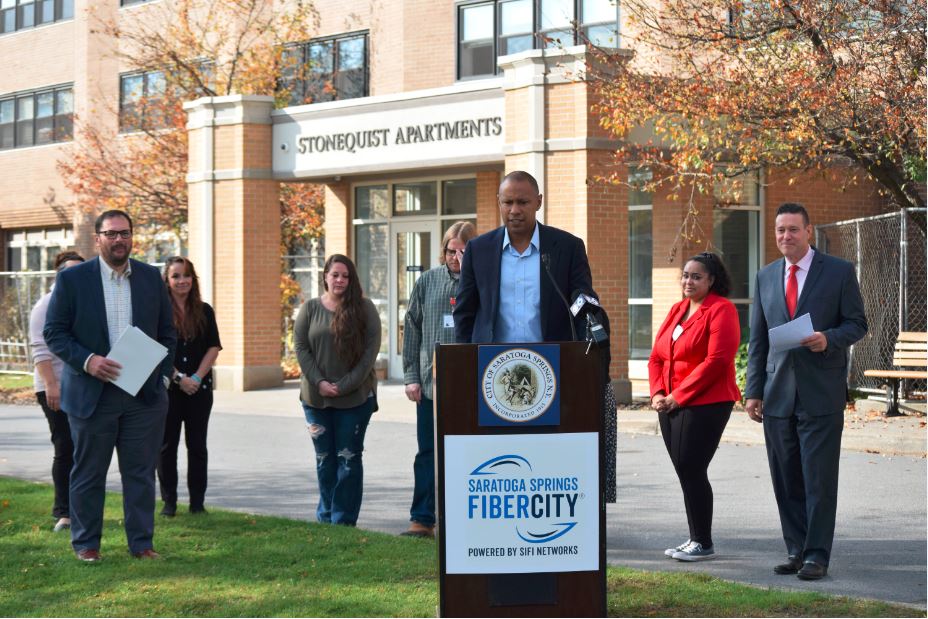 Residents residing in Housing Authority properties will have access to fiber service with Gigabit speeds – among the fastest available in the United States – at a monthly price reduction of 50%. Overall, it is estimated that these households will save around $30,000 per month or $350,000 per year across the entire Housing Authority portfolio.

The Commissioner also announced that Housing Authority offices will also receive a discounted service, a benefit for all ratepayers.

“The community is already realizing the benefits of bringing FiberCity® to Saratoga Springs,” Golub said in a press release. “One of my goals is to connect all of our residents to opportunity. When fully built in 2024, every resident will have access to fast, affordable, and reliable fiber optic service. Closing our city’s digital divide means connecting residents to jobs, education, healthcare and other services here or anywhere in the world, seamlessly.

“We connect the whole community to opportunity.”

SiFi Networks spokesperson Bob Knight added, “We are very pleased to partner with the City of Saratoga Springs in supporting Commissioner Golub’s vision for digital equity for the entire community. As the network is being built across the city, every home, business and institution in Saratoga Springs will have equal access to high-speed fiber, ushering in a new era of opportunity.

He continued, “And because we’re building an Open Access network, multiple vendors will be competing for customers on FiberCity®, resulting in more competitive pricing, reliable service, and Gigabit speeds, a first in the state of New York.

According to Paul Feldman, executive director of the Saratoga Springs Housing Authority, 700 units under his group’s management are eligible for SiFi’s FiberCity® Aid program.

“Providing a deeply discounted service to these families will change lives. I applaud the vision and efforts of Commissioner Golub, SiFi Networks and GigabitNow who have worked to ensure that all Saratogians have affordable access to ultra-high-speed internet,” he said in the statement, “ Helping deserving households participate in the digital economy and enjoy the same benefits as their friends and neighbors with more means is a game-changer for all of us.

The first households will have switched on fiber in the fall of 2023 and all households in the city should have the service by the end of 2024. Service providers like GigabitNow will advertise prices closer to the switched on network to help prevent city ​​predatory price offers. current internet service providers. Those interested in pre-registering for high-speed broadband service can contact