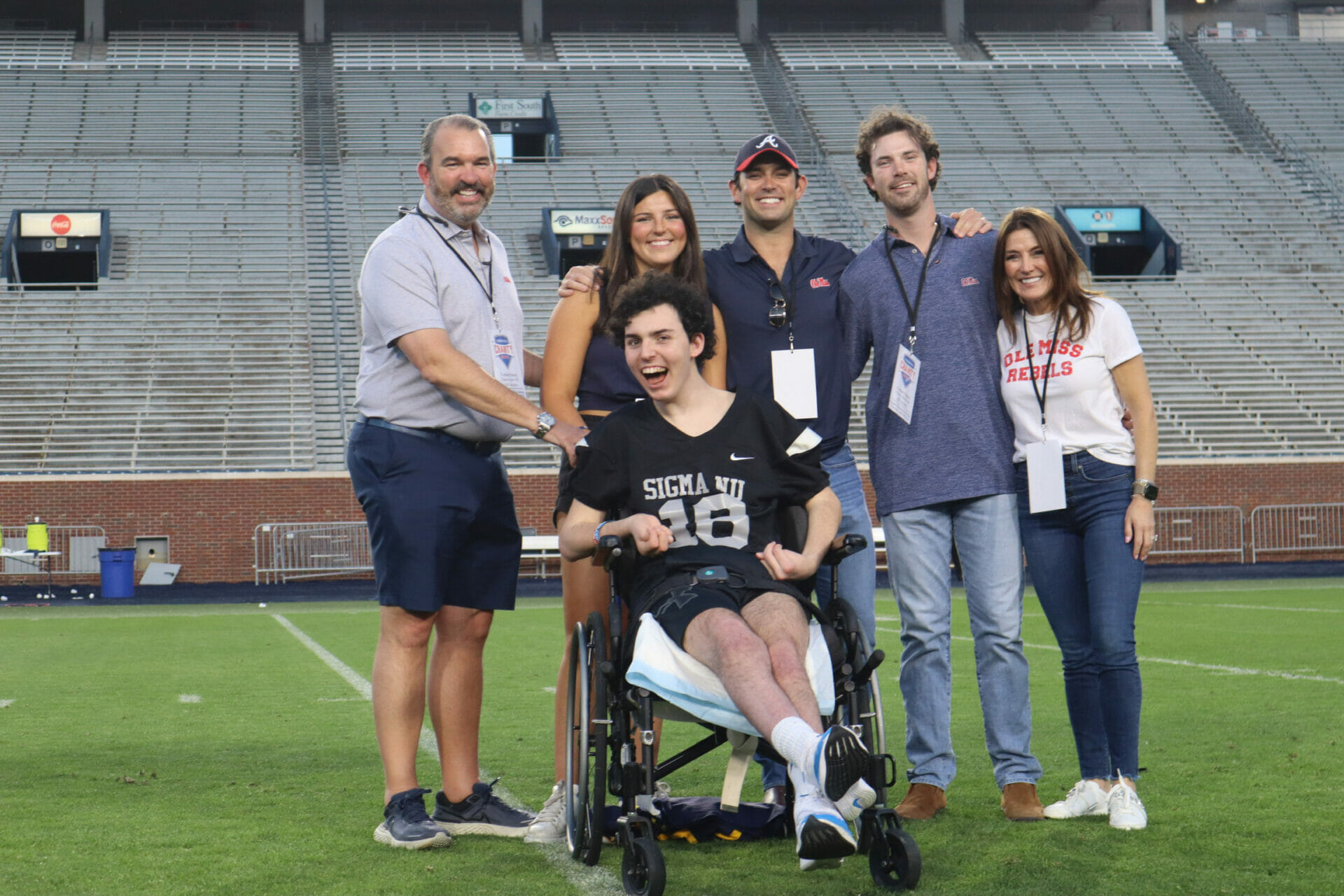 By Edwin B. Smith

Devon Corbett was a normal teenager until a skiing accident left him paralyzed two years ago. This spring, he is the recipient of a record-breaking charitable response from the 32nd annual Sigma Nu Charity Bowl at the University of Mississippi.

The Charity Bowl pits members of Sigma Nu and Kappa Alpha against each other in a football game played at Vaught-Hemingway Stadium. This year, the fraternity set a fundraising record, with more than $300,000 raised through ad sales and donations.

While on a school ski trip in 2020, Corbett lost control of his skis and hit a tree at high speed. The collision caused diffuse axonal injury in the 15-year-old’s brain. DAI occurs when the brain moves rapidly inside the skull, causing the long connecting fibers in the brain, called axons, to shear off.

“He was wearing a helmet – a brand new one purchased that morning – which undoubtedly saved his life,” Corbett’s family said in a statement posted on the Charity Bowl website.

“Devon responds most to his three amazing siblings and his friends, and we are so grateful for the love and support that Devon and our family continue to receive.”

Twenty months into the battle of his life, Corbett is visiting several specialized rehabilitation centers across the United States to receive the best possible rehabilitative care for his injury. When not in therapy, he receives 24-hour care. Corbett works hard and has come a long way, but he still cannot walk, talk or eat without help.

“The more intensive therapy he receives, the better he progresses,” Corbett’s family statement said. “Unfortunately there aren’t many places that can cater for all of Devon’s needs, and insurance pays so little.

“We are so grateful and humbled that Devon has been chosen to be the 2022 recipient of the Sigma Nu Charity Bowl, thanks to the fine young men of this fraternity, including great friends back home.”

The first Charity Bowl began in 1990 in honor of Roy Lee “Chucky” Mullins. A beloved Ole Miss football player, Mullins’ life changed forever in 1989 when he was injured in a game against Vanderbilt University. The injury paralyzed him from the waist down. After returning to school, he died in 1991.

“Devon was ultimately selected as our recipient this year because of his infectious spirit, determination and bravery,” said Will Fletcher, a young Jackson business student and co-chair of Sigma Nu Philanthropy.

“Hearing about his injury, his recovery progress and speaking with a few of our members who know his family made it clear that Devon epitomized everything we were looking for in a Charity Bowl recipient selection,” said Bradley Brantley, a junior in management information systems. of Jackson and co-chair of philanthropy.

Of the money raised, $50,000 will go toward expanding student services at the university’s William Magee Center for AOD and Wellness Education. The Manning Family Fund will receive $25,000 to fund projects at UM Jackson Medical Center, including the expansion of Blair E. Batson Children’s Hospital.

“This year’s Charity Bowl was an incredible success,” said Stewart McCullough, a recent accounting graduate from Gluckstadt, president of the Sigma Nu chapter and co-chair of philanthropy. “From the pre-match cheering competition to the football game and half-time return pitch presentation, everything was flawless.

“It was amazing to see how many students attended the game and how invested the Ole Miss family and student body were in this year’s Charity Bowl.”

Lee Baker, a recent accounting graduate from Augusta, Georgia, and president of Kappa Alpha fraternity, said the Charity Bowl is a special opportunity to compete while positively impacting the Ole Miss Greek community.

“We chose to play in the Charity Bowl to be just a small part of the collaboration between coaches, players, sponsors and fans to honor the life and contribution of Chucky Mullins,” he said. he declares. “KA was honored to participate in the Charity Bowl, and we look forward to playing again in the future.”

In the years since its inception, the Charity Bowl has become the largest collegiate Greek philanthropy in the country, raising over $3 million for its beneficiaries.

Updates on Corbett’s progress and other ways to support his recovery can be found on his Instagram account, @D1_strong. For more information, visit https://www.sigmanucharitybowl.com/ and https://www.facebook.com/SigmaNuCharityBowl/.